To find out more how you too can unleash your networking and brainsworking potential, Brainswork offers a series of exciting lectures and workshops with top-notch international networking experts such as Brainsbook editor and initiator Selma Prodanovic. 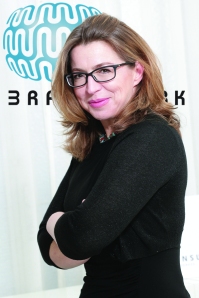 Selma Prodanovic is an entrepreneur and philanthropist known as the discoverer and connector of business potential or the Start-up-Grand-Dame. Her passion lies in unlashing the untapped entrepreneurial potential of millions of creative and innovative future-makers from around the world.

She invests in the development of the entrepreneurial ecosystem in Vienna and the region at large where she supported over 300 startups. She founded Brainswork, one of the most influential boutique business developers in CEE; initiated IncrediblEurope 2049 – the first bottom up value – changer in and for Europe based on innovation, creativity, entrepreneurship and future studies; and established the „Brainswork – Make a difference“ Award. Selma has pioneered various concepts such as Chief Networking Officer, the business development strategy brainsworking, and most recently the Business-Angelina investment approach. She is co-founder and board member of the Austrian Angel Investors Association and co-organizer of the European Business Angel Congress EBAN 2013.
Selma had a significant impact on the growth of creative industries, the startup, and business angel environment in Austria and beyond.

An inspiring speaker, Selma lectures on networking, creativity, innovation and entrepreneurship at numerous universities and conferences around Europe. She initiated and published the Brainsbook on Networking” written by 40 authors from fifteen countries in 2009. Her book “Between Steel and Chocolate – inspiring Success Stories from Austria” was published in 2013. For her innovative approach to business and commitment to entrepreneurship and social change, Selma was awarded the Austrian “WOMAN Award” in 2006, the “MiA 2010” in the category Business, the “Recognition Award of the jury for Entrepreneurial Migrants 2010”, and nominated “Networker of the Year” by the Austrian Leading Ladies in 2007 and 2010, while her success story was featured in the book “Going Your Own Way” („Den eigenen Weg gehen”).

She is holder of the “ 100 World of Difference Award 2013” awarded by The International Alliance for Women in Washington. Selma believes that making a positive difference is a fundamental human right. She is the founder of the Brainswork Institute, the first development network for highly talented teenagers in disadvantaged communities, and a board member in various organizations and companies.
Born in Sarajevo, Bosnia-Herzegovina, Selma lived in several countries in Europe and North Africa and has been based in Vienna since 1991. Educated at the University of Sarajevo, Saint Louis University in Madrid, and the Vienna University of Economics and Business Administration, Selma speaks five languages. Selma is happily married to her first love and proud mother of two fantastic teenagers.